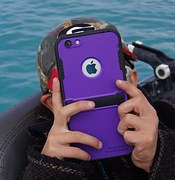 Experts are urging Apple users to update their devices

One of the biggest Android security scares of 2015 called Stagefright has made its way to the Apple world. The Stagefright malware was a critical bug in the operating system’s Mediaserver, which allowed malicious code on an Android device if the user opened an email, received a media file, or browsed to a an infected website.

This vulnerability has now been found in Apple products. Earlier last week, Apple issued a patch for a new security exploit that could let a hacker take over a device simply by having a victim view a single image. The patch repaired five vulnerabilities, one of which resembled the Stagefright virus.

What is the threat?

A remote hacker could execute malware code on your device by getting you to view photo by texting, emailing, or getting you to browse an infected website. By spoofing a known phone number, for example, you might not recognize that the picture was from a hacker and contained malware.

How does it work?

The attack is possible because of exploitable bugs in how Apple iPhones and Macs process image files to render a thumbnail.  Those vulnerabilities can be exploited by a maliciously-crafted image file (in BMP or TIFF format) to achieve remote code execution on the targeted device.

How to stay safe?

Here is how you do it: Settings > General > Software Update. Tap “Download” and “Install.” To update your desktop or laptop OS, click on the “Apple” menu and select “Software Update.”

Be the first to comment on "Apple users, update your operating systems NOW"